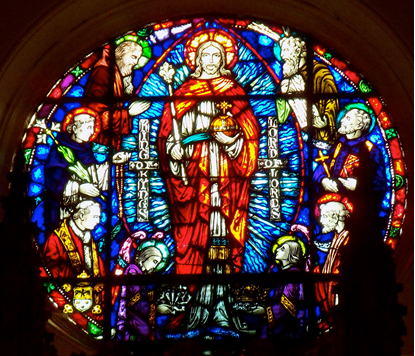 The great window above the main altar of our church was executed in honor of Christ, Our King. Christ is standing in His glory, adored by men and angels, symbolic of His power as ruler of all things on earth as well as in Heaven.  A simple composition portraying one of the tenets of our Catholic Faith through the traditional medium of symbolism in art.

To the upper right as you look at the window stands Moses holding the tablets of the Commandments given him on Sinai. Hereby is expressed the authority of God. At the upper left is the Prophet Isaiah who foretold the coming of the Messiah to redeem mankind. Below him, holding a lily, is Saint Dominic, founder of the Order of Preachers (Dominicans) a great medieval teacher of the Western Church. Saint Dominic is carrying in his left hand the Rosary of Our Lady. It was Dominic’s preaching of devotion to the Rosary that stemmed the plaque of the Albigensian heresy, which threatened to destroy Catholicism and the Western World in the early Thirteenth Century. The paganism, which threatens the American Church and the American Culture today, demands a return on our part, as families and as individuals, to the daily recitation of the Rosary, and increased devotion to The Lady Mary.  Directly opposite him (and below Moses) is Saint Francis Xavier of the Society of Jesus (Jesuits) the great Apostle to the Eastern Church. Both men symbolize the spread of Christ’s power over the entire earth.

Saint Peter, the first Pope, to the right beneath Xavier, represents the Holy Church Christ founded by Christ, and His faithful followers through the centuries. Superimposed at his left arm is the Coat of Arms of the Papacy with the tiara and the crossed keys symbolizing the power of opening and closing (loosing and binding) given Peter and his successors by the Lord. The tiara symbolizes the complete and total spiritual power given by God to the Bishops of Rome. Opposite Saint Peter (below Saint Dominic) is Pope Pius XI, the Holy Father at the time the window was created and the Pope who instituted the Feast of Christ, the King. He symbolizes the Apostolic Succession throughout the ages. At the feet of Christ one angel holds the Crown of Thorns, the other offers the glorious Crown of Heaven. Donated by the John Cahill family, the window is made up of richly colored jewel-like antique glass in the medieval spirit.